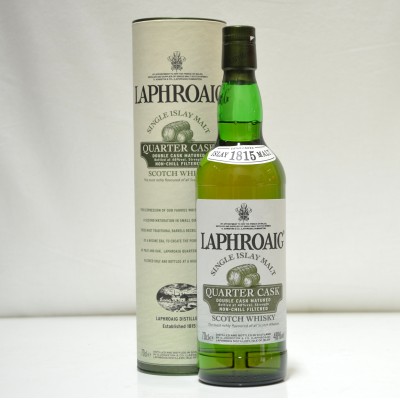 Who better to explain than Laphroaig themselves"

"Laphroaig Quarter Cask takes its inspiration from the small casks often used for Scotch Whisky in the 19th century and frequently transported across the Glens by packhorse.

As the industry grew, they fell into disuse – bigger and more cost effective barrels became the norm, for maturation and transportation.

However as single malt lovers may know, the relationship between the barrels and the maturing spirit is critical. We noted that the small cask size gives up to 30% greater contact with the wood compared to some of the larger sizes used today, thus greatly intensifying the maturation process.

It was decided to recreate some of the Quarter Casks and the flavours they produce. We transferred some still maturing Laphroaig from our larger style barrels into the Quarter Casks. There then followed a further periods of maturation in our original Dunnage Warehouse No1.

For greater authenticity we simply barrier filtered the whisky – the method used in those far off days – and bottled at a higher alcoholic strength."