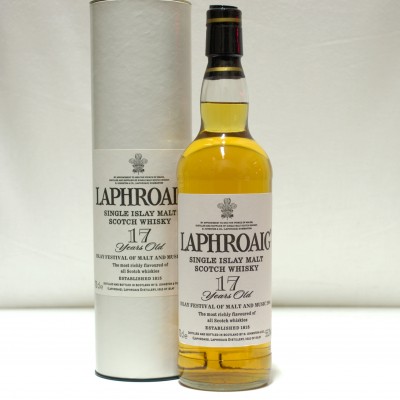 With Certificate of Authenticity which reads : This unique Laphroaig bottling in clear glass comes from a distillation of spirit in 1987, which was ﬁlled in to cask number 4299. The American Oak barrel has been maturing in our dunnage Warehouse No. 7 until May 2004. There are only 250 bottles available from this unique 17 Year Old Laphroaig. The cask was initially ﬁlled at a strength of 63.5% ABV and the Angels have taken their share reducing it now to 55.2% ABV.

This is the strength at which we have barrier ﬁltered the cask into a de-charred barrel in our Visitor Centre at Laphroaig. Our Master Blender, Robert Hicks selected cask number 4299 as 'the best of the examples of the year of 1987', and his tasting notes on this cask are transcribed below:

"This special Laphroaig shows such a fullness of age that gives it a massive depth of ﬂavour that is thick and sweet, almost syrupy. This depth almost masks the power that hides undemeath. The taste has a nice balance of sweetness, liquorice and peat that although not as particular as the 10 or 15 year olds shows the distinct character of Laphroaig with a twist. A superb example that shows how the wild spirit of Laphroaig can be partially tamed."