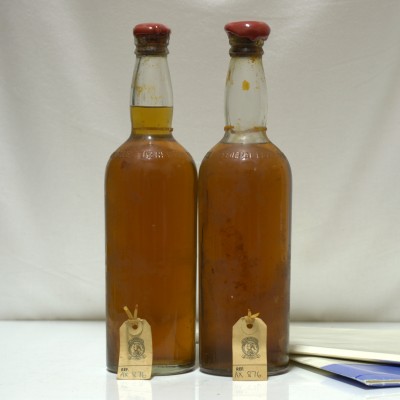 The SS Politician was an 8000-ton cargo ship owned by T & J Harrison of Liverpool. It left Liverpool on 3 February 1941, bound for Kingston, Jamaica and New Orleans with a cargo including 28,000 cases of whisky. The ship sank near the island of Eriskay in the Outer Hebrides, off the west coast of Scotland, and much of the wreck's cargo was salvaged by the island's inhabitants. The story of the wreck and looting was the basis for the book and film Whisky Galore!

In 1987 professional diver Donald MacPhee, from South Uist, found eight bottles of whisky in the wreck. He sold them at auction and walked off with £4000.

Now two of those bottles are being offered at auction. The package contains neck tags from Christies which auctioned them for Mr MacPhee, and letters of authentication. The bottles were resealed under Christie's supervision.

This lot of two bottles is incredibly scarce and provides a rare opportunity to obtain a real piece of Scottish history.

Featured in The 25th Auction, ended May 5, 2013
Send to a friend or post on:
FacebookTwitter