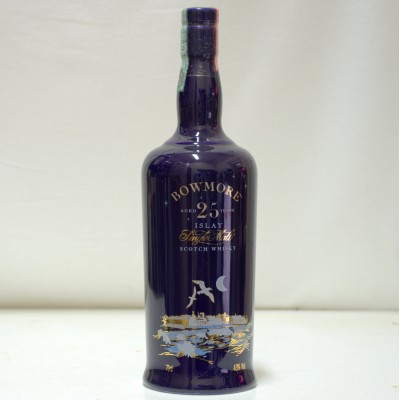 A 25 year old Bowmore Islay malt that is presented in a rather stunning ceramic bottling, adorned with seagulls. Discontinued and very rare. 70cl and 43%ABV.

When the Scots spread from their Celtic homeland to create the Kingdom of Dalriada-in-Alban, the Pictish and Brythonic tribes who already occupied the lands resisted fiercely. Legend has it that the daughter of a Pictish King fell in love with a captured Scottish warrior and helped him escape. Together they fled westwards to Islay. As they rowed towards the young warrior's home on the shores of Loch Indaal, a terrible storm lashed their boat, sending it crashing against the rocks.