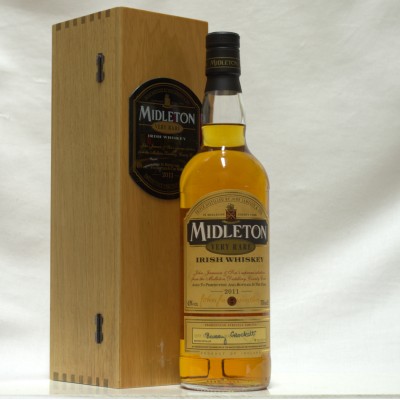 Midleton Very Rare, a magnificent blend of the finest distillates hand-picked by the Master Distiller, Barry Crockett, is one of Ireland's most exclusive whiskeys. Whiskeys from the old Midleton distillery have always been acknowledged as special.

This whiskey is aged between 12 and 25 years, and is matured exclusively in seasoned Bourbon barrels. Midleton Very Rare was launched in 1984 to celebrate the whiskeys of the Midleton distillery, and a new vintage has been released every year since then.

Each bottle carries its own individual number and the signature of our Master Distiller. This annual release of a new vintage is a departure for the whiskeys of Irish Distillers where consistency from year to year is highly valued. The individual nature of the selection process for each vintage of Midleton Very Rare means that each year's vintage provides its own character.

Winner of Gold at the 2005 San Francisco World Spirits Competition.