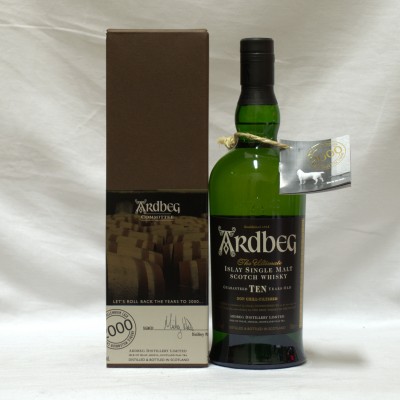 For the people who were there that day, it wasn't simply the art of filling a cask. It was symbolic of the heart, sould, dedication and determination poured into resurrecting one of the greatest distilleries there ever was. And is ...

So goes the introduction to the Ardbeg Millennium Cask, a STRICTLY limited edition of 100 bottles from a bourbon barrel available to only a very privileged few who were there. Filled on Saturday, June 3, 2000 in the filling store of Ardbeg Distillery, cask no 1737 was filled at a strength of 63.4% and was matured in warehouse number 3.

Included in this lot is the neck tag telling the story, along with the names of those who were there, and a certificate signed by the then distillery manager Stuart Thomson. The box is signed by Mickey Heads, who replaced Stuart as Manager.

Rare and collectible doesn't begin to describe it.