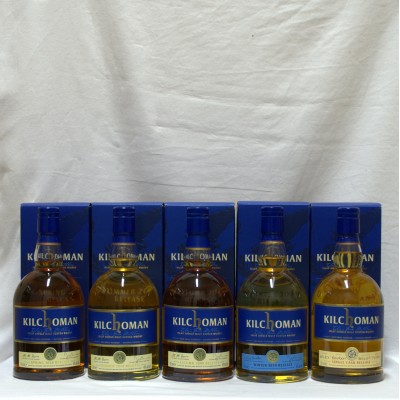 A whole year of Kilchomans, plus.

Autumn 2009: The second release of Kilchoman after the Inaugural edition. This has been finished for three months in sherry butts after 3 years of bourbon barrel maturation. 700ml, bottled at 46%

Spring 2010: This was matured for three years in fresh Buffalo Trace bourbon barrels before a 3.5 month finish in very active Oloroso sherry butts. 70cl and 46%

Summer 2010: Summer 2010's offering from Kilchoman is the fourth official general release from Islay's newest (and smallest) distillery. 70cl and bottled at 46%

Winter 2010: The 5th release of Kilchoman after the Inaugural edition. This whisky has been in for 3 years in bourbon barrels. Bottled at 46%ABV / 70cl.