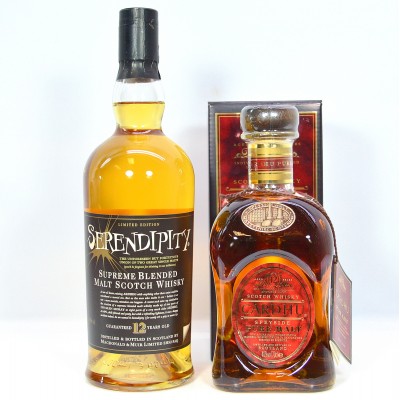 Two whiskies with stories to tell.

You all know the story by now. Some venerable Ardbeg gets mixed up with Glen Moray and they wonder if they should throw away the resultant vatting. Not likely!

In step the marketing folks and the result is this, the unforeseen but fortuitous union of two great single malts, some very old Ardbeg and Glen Moray. Bottled at 40%, guaranteed 12 years old. 70cl

The one that started an almighty row. From our friends at Royal Mile Whiskies:Cardhu is the whisky responsible for re-defining whisky, following the media ruckus that took place a few years ago. Fuelled by the success of the Cardhu single malt, mainly in the Spanish market where it is a very fashionable drink amongst the young socialites, the distillery owners decided to re-package it as 'Cardhu Pure Malt'.

The 'Pure Malt' - which was a readily used description of malt whisky which was not from a 'single' distillery - included malt whisky from Glendullan distillery. The story goes that other whisky producers, jealous of Cardhu's large market-share, raised the matter very publicly with the Scotch Whisky Association (SWA). The row that ensued lead to Cardhu reverting to being a Single Malt again, and to the SWA reviewing the use of such descriptors as 'Pure' or 'Vatted' Malts, which were until now in common usage.

The new description of 'Blended Malt' is also proving controversial with some saying that it will lead to such products being confused with 'Blended Whisky' which includes less expensive Grain whisky as well as Malt Whisky.