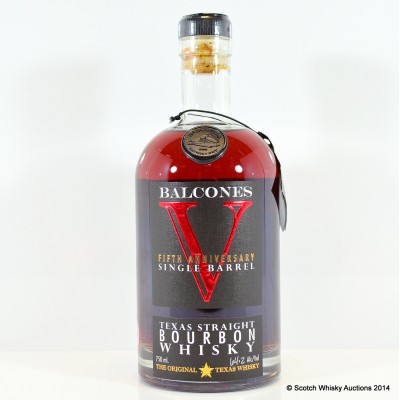 This bourbon marks the 5th anniversary of the creation of Balcones distilling. It all began with Texan, Chip Tate, hand building his copper stills in an old welding shop. In the mean time they've picked up more than a smattering of awards for their seven spirits; over 40 national and international awards to date.

As part of their celebrations there are plans to release a series of bottlings; this being the first one. It is the first "full sized" barrel of bourbon they've ever produced but also the first single barrel release in Texan history. Quite rightly so, they are very proud of the Double Gold medal this bourbon was awarded at the San Francisco World Spirits Competition. There were only 10 bottles sent to the UK, so this is very rare over here.

Each bottle is signed by Chip Tate himself.