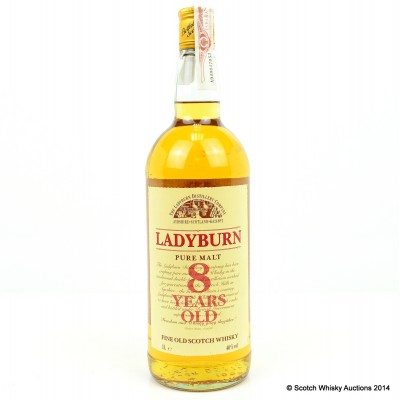 From Master of Malt: The Ladyburn distillery was founded in 1966 by William Grant and Sons Ltd. The whisky distillery sits on the same site as the grain distillery, Girvan; in fact, Ladyburn was not so much a new distillery, rather the addition of a further two sets of stills in a corner at the same complex. The two distilleries not only share a site, but also a place in Grant’s blended Scotch. Ladyburn single malt whisky is rather rare, in stark contrast to its illustrious William Grant-owned siblings, Balvenie and Glenfiddich.

The Ladyburn stills were operational for a less than a decade, closing as they did in 1975. They were subsequently dismantled in 1976. Ladyburn whisky is sometimes bottled under the name Ayrshire. Ladyburn drew its cooling waters from the Penwapple Reservoir.