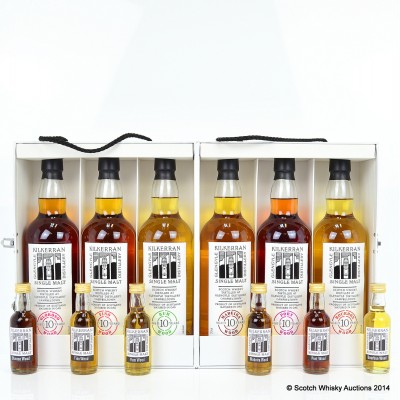 To mark the 10 year anniversary of the re-opening of Mitchell's Glengyle Distillery on the 25th March 2004 they released this 6 pack of different cask types. These 6 casks were filled with the first spirit to run of the stills and were laid down to be bottled for the distillery's 10th birthday in 2014. These casks were chosen with help from Willie Taylor from Broxburn Cooperage to ensure the highest quality possible.

These were released on the 21st of May and 400 sets of six bottles were issued.

This lot includes the mini pack as well which contains the same whisky but these have been bottled at cask strength. As follows;

The Full Bottle Set details are as follows;

Age: all bottles are 10 years old

Bottle Number: Each of these bottles is one of only 700 released

Featured in The 41st Auction, ended September 7, 2014
Send to a friend or post on:
FacebookTwitter