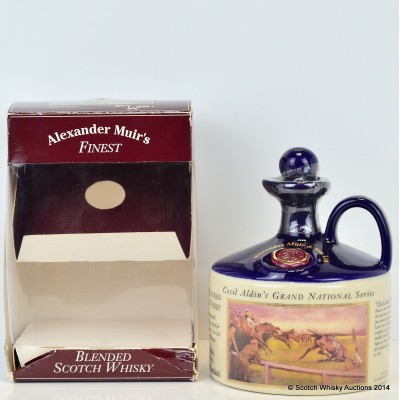 First run at Aintree, Liverpool, the Grand National has, since its inauguration, captured the imagination of the British public.

Scenes taken from the 1920 running of the National record some of the excitement and danger of this celebrated race.

Painted by Cecil Aldin, one of the most respected British artists of the early 20th century, the illustrations have been fired onto best quality earthenware jugs, which have been filled with some of Alexander Muir's finest reserves of scotch whisky (a choice of 15, 21 or 25 year old blends).

Each jug is packed in an individual gift carton with a see-through cardene window so that the jug is clearly visible.

Available in outer cartons holding 4 or 6 jugs of 70cl.