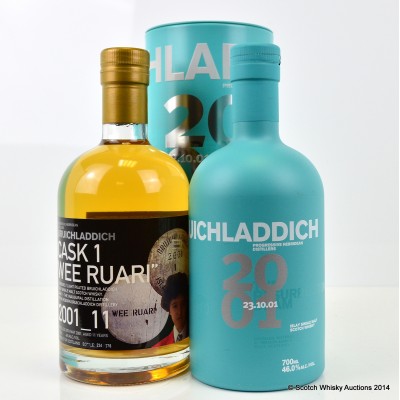 Distilled 29th May 2001 and named after the son of Mark Reynier who “filled” this cask, pictured on the label.

Cask 1 “Wee Ruari” was the first cask filled at Bruichladdich by the new management team.

Mark Reynier asked Loch Fyne Whiskies to sell 250 of the 376 bottles yielded from the cask, the balance of the bottles are being retained by the family and Ruari who was five months at the time of filling.

Paired with the Bruichladdich Resurrection, the first distillation since the distillery was revived. Constructed from 11 year-old 10ppm bourbon-matured distillate made by Jim McEwan in 2001 after the new regime came to power.