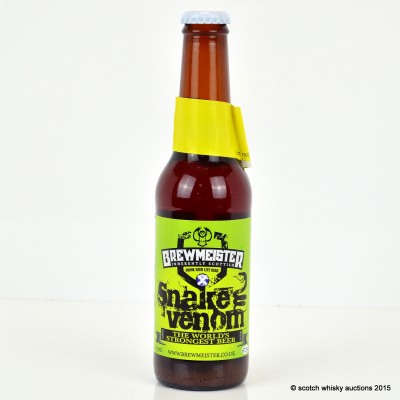 Brewmeister. Where to start? Well.... Up in the wilds of Moray, two friends formed a brewery back in 2011. And as if that wasn't enough of a challenge they set about creating the world's strongest beer, which they achieved with their beer called Armageddon at a casual 65% ABV.

But this wasn't enough, they set out to go further than that and came up with Snake Venom, clocking in at a whopping 67.5% ABV. That's around the same strength Ardbeg cut their spirit to put into casks...

"Made up of special ingredients to achieve such a high volume of alcohol including smoked peat malt and two types of yeast: beer yeast and champagne yeast. Unlike Armageddon, Snake Venom is not designed to mask the taste of the alcohol. The alcohol is very strong but the beer still tastes like a beer rather than a spirit. It's hoppy, malty and very pleasant," so say the guys at the brewery.

To get the correct ABV each batch is tested in the brewery with random batches being checked by external labs. It's worth bearing in mind that there are 18.4 units of alcohol in this small bottle of beer, that's just 10 less than a whole bottle of whisky!