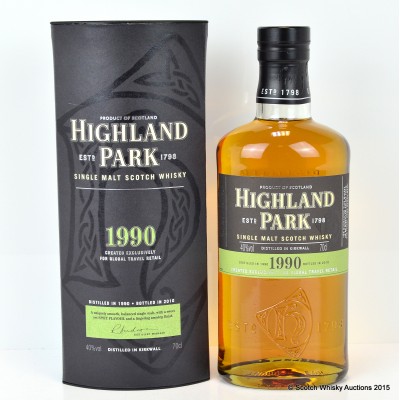 We do like a bit of history with our drams! This from the Highland Park website:This variant of Highland Park is exclusively for global travel retail and duty free markets and was first released in April 2010 having been distilled in 1990.

A year of world events that are forever etched in history. West Germany had defeated Argentina in the FIFA World Cup Final, a few months later East and West Germany reunified into a single Germany and the infamous Berlin wall came down.

Mikhail Gorbachev was awarded the Nobel Peace Prize. The Best Picture Oscar was awarded to Driving Miss Daisy in which the brilliant Morgan Freeman sparking with classy Jessica Tandy. The Three Tenors sang together for the first time with Pavarotti’s interpretation of Nessun Dorma the highlight.

British acting talents Emma Watson, who plays Hermione in the Harry Potter films, and Dev Patel who starred in Slumdog Millionaire were born.