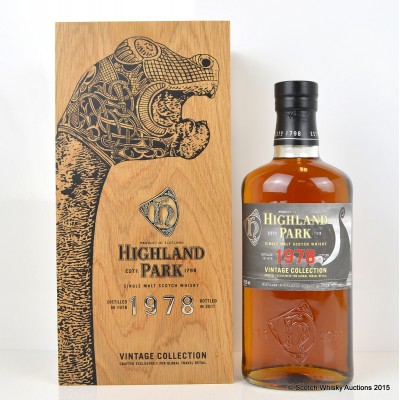 Highland Park 1978 Vintage is a traditionally hand-crafted single malt. The sixth release in the range, this limited edition expression, builds on the quality of its Vintage Collection created exclusively for travel retail.

With direct reference to its Viking heritage, the front of the 1978 Vintage presentation box features a beast’s head with bared teeth and wide eyes. The back of the head and neck are covered with a series of birdlike figures intertwined in an elaborate pattern. The original carving is a masterpiece attributed to a craftsman nicknamed ‘the Academician’ which demonstrates the skill of the Viking woodcarvers.

The new expression sits alongside the existing range which comprises whiskies from 1998, 1994, 1990, 1973 and now 1978. The differentiation between the expressions has been achieved through subtle variations in the use of first-fill and refill European and American oak casks which determine the character of each whisky.

The younger vintages in the Vintage Collection are bottled at 40%. However, Max McFarlane, Whisky Maker at Highland Park, has opted for a higher-strength on this expression which is bottled at 47.8% ABV, a reminder of the complexity that Highland Park is able to deliver.