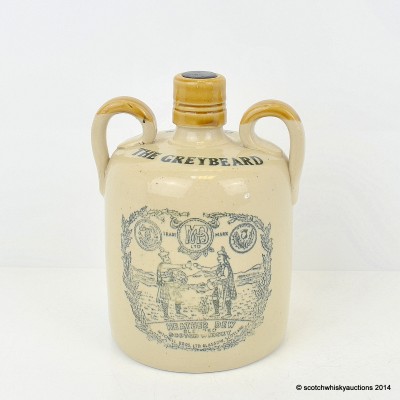 With its echoes of Al Capone and Prohibition in the US, this Scottish whisky jug hails from the 1930s . The bottle of Heather Dew Blended Scotch Whisky was produced by Mitchell Bros Ltd based in Glasgow. The potter was Possil Pottery famous for their Scots Whisky jugs and their mark is embossed on the base along with writing "Made In Scotland.". The company closed down on September 18, 1942.

The jug carries the name "The Greybeard" on the top. There is a transfer on the front with the two Clansmen in their tartan and their kilts sharing a "wee dram" out on the moor with the Highlands in the background. The bottle also carries the statement "FEDERAL LAW FORBIDS SALE OR REUSE OF THIS BOTTLE " which dates it after January 1st, 1935 when all liquor sold in the United States was required to be in bottles carrying that statement because of prohibition.

Many empty jugs have been sold at auction, but we believe this is one of the few still containing its precious liquid.

No ABV or volume information available.