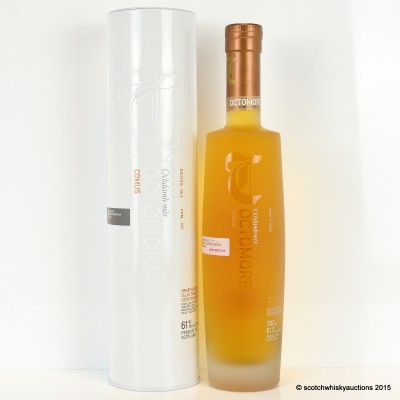 Comus was the son of Bachhus [god of wine and revelling] and Circe, daughter of Helios the sun god, and a sorceress who would beguile the innocent into drinking her magic potions.

"Comus" was a play written by poet John Milton and first performed in 1634 at Ludlow Castle, England. The work presents the desperate battle by Comus to ensnare a beautiful, innocent girl and through the hedonistic power of his magic potions ­ - "his orient potions in a crystal glass" - ­ rob her of her virginity. A philosophical discourse on the battle between sensual pleasure and physical abandon, and reason and virtue.

All very Bruichladdich.   In this Octomore 4.2 "Comus" we see this same duality ­ the interplay between the brooding power of the exceptional Octomore peat and the sublime elegance of casks that previously held the world¹s greatest sweet wine.  Hence the white, virginal, innocent packaging - ­ but like our heroine, do not be deceived... all is not what it seems.