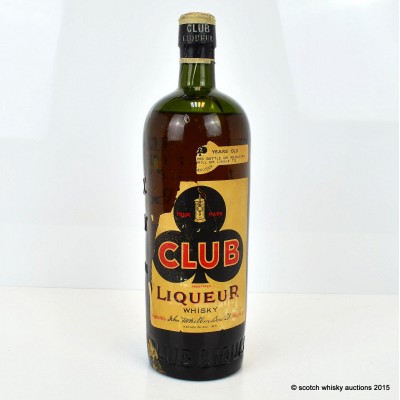 This whisky was blended and bottled by John McKibbin and Son of Belfast. The company was founded in 1871, and started blending their own whisky (note the lack of an 'e') in a similar fashion to say Johnnie Walker. They had a fantastic slogan that might not sneak by trading standards today, "Not a Headache in a Hogshead".

Due to the rise of Scotch blended whisky, which was quickly surpassing Irish as the world's favourite thanks to the use of patent continuous stills, four leading Dublin distillers published Truths about Whisky in 1879. In the aftermath of the publication Irish whisky has an 'e' added to distinguish it from Scotch, this was followed in a very piecemeal fashion.

We estimate this bottle hails from the late 19th, or possibly early 20th century.

No ABV or Volume visible

Please note the condition of the bottle and labels