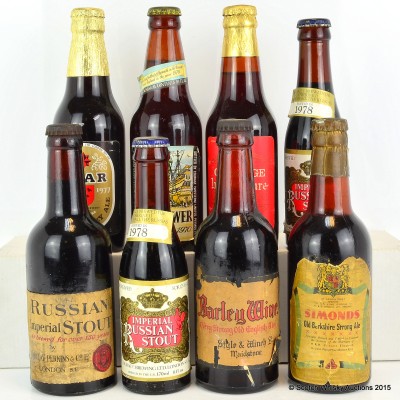 This is a fantastic lot containing 8 old bottles of beer, all of which have a shared history. They come from different breweries which were over time bought by Courage brewery, which itself has been consumed by Wells & Youngs. All these beers were brewed as "strong ales" or "Imperial Russian Stouts" denoted that they were brewed with high OG (original gravities) or ABVs as we would refer to it today.

This brewery has had many names over the years. Founded as Baldwin & Holmes in the 1850s, changing to Holmes & Style a decade later before being incorporated as Style and Winch on 17th March 1899. Over the next 30 years they bought several smaller breweries before being acquired by Barclay Perkins in 1939. They finally fell into Courage's portfolio in 1964 before they were liquidated in 1970.

We have no OG / ABV or bottle size information available for this beer, and the label is in quite a fragile state.

With strong military links to the British Army. It is said that their insider knowledge was so good that during Summer manoeuvres in 1872 on Salisbury Plain, when the troops reached a secret destination they found Simonds' staff with barrels tapped and beer ready to pour for the thirsty men! After this it was decided that it was perhaps best to enlist the brewery as their specialist suppliers. It merged with Courage and Barclay in 1960 although you can still find their famous Hop Leaf Pale Ale in some rather unusual destinations such as Malta! This bottle was released as a commemorative bottling for HM Queen Elizabeth's wedding in 1947.

We have no OG / ABV or bottle size information available for this beer, and the label is in quite a fragile state.

Founded in 1889, this brewery was actually the merger of five other local breweries, with production taking place at the Plymouth Regent Brewery. Famed for their "Heavy" beer, Courage decided to cease brewing it in 1984. They only saved the Shire horses to soothe the loss of the brewery and its beer! This beer, the Mayflower Ale, was brewed to mark the 350th anniversary of the sailing of the Pilgrim Fathers from Plymouth. It was created at the time of the merger between the Regent Brewery and Courage in 1970.

No OG / ABV information but bottle size of 9 2/3 Fl Ozs. The labels are coming away from the bottle.

This bottling was to commemorate the investiture of Prince Wales, on 1st July 1969.

The Star Brewery was incorporated in 1886 but can trace its roots back to 1777. It was acquired by Courage, Barclay and Simonds in 1965 and ceased production in 1967, which is why if you look at the label closely you'll see that this bicentenary ale was actually brewed at the Courage Brewery in London.

These 3 bottles represent an legend of beer history which has endured centuries of production and has been re-instated by Wells & Young under the Courage label in 2011. Barclay Perkins was an enormous brewery, not only the largest in Britain but the largest in the world. The Imperial Russian Stout was created as an 'extra stout' for exporting to the Baltic countries. The Courage bottles still bear the message that they were originally brewed for "Catherine II, Empress of all the Russias". Becoming the standard bearer of the style, Barclays brewed this beer to an OG of over 1107, meaning that it was over 10% ABV! The recipes also show that there were a lot of hops in the beer, defeating the old myth that old beers didn't contain many hops. It was sent out in huge hogshead casks all over the world.

The first of our Russian Imperial Stouts comes from the Barclays era of brewing, with the two smaller ones coming under the Courage period after the merger in 1955.

Please note that due to the age of the bottles, some of the bottle labels are extremely fragile. We are unable to offer insurance on the shipping, and the purchaser accepts full liability for the shipment of these old bottles.

Featured in: The 54th Auction (Ended October 4, 2015)
Send to a friend or post on:
FacebookTwitter