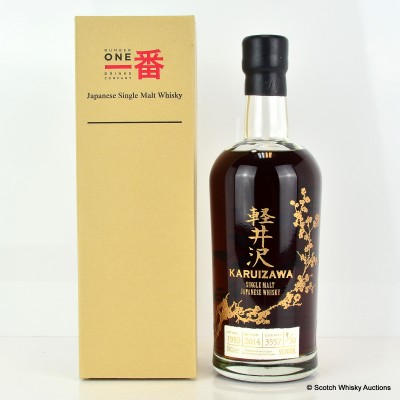 All attendees took home a 70cl bottle of the fifth and final whisky that has been bottled specially for this event: a 1983 Karuizawa, of which only 50 bottles exist.

This special tasting – one of the most expensive ever staged in the world – benefited five good causes, set on raising money for the Nepal Appeal, with all proceeds being split among them.

Karuizawa is a distillery that has achieved cult status among whisky drinkers and collectors. Set up in 1955, in the ski-resort town of the same name, Karuizawa’s climate is similar to that of the Scottish Highlands, and the distillery imported Golden Promise barley from Scotland. Much of Karuizawa’s stock was aged in sherry casks, and it is testament to the quality of these casks that the whiskies are vibrant, rich, fruity and full of life even after 30-40 years in barrel.

The distillery closed for good in 2011, so its lost-distillery status has merely added to its appeal, given that bottles of Karuizawa are increasingly hard to find. With some of the rarer Karuizawa bottlings are achieving record prices, could this bottle join them?

Featured in The 55th Auction, ended November 1, 2015
Send to a friend or post on:
FacebookTwitter