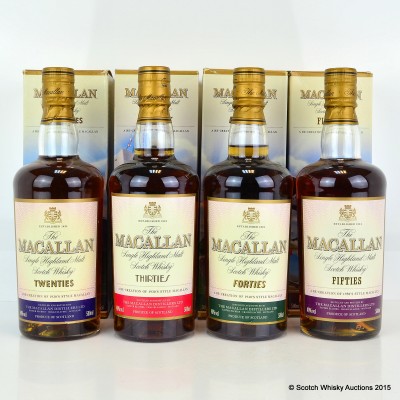 Winning bid: £450.00
Lot number: 0550616
The Collectable range of 4 variants, recreated by Macallan's Whisky Maker, reflects the style of The Macallan in the 1920s, 30s, 40s and 50s and the distinctive packaging features a classic mode of travel from each era.
To re-create the style the Master Distiller sampled bottles of The Macallan from each decade and matched their aroma and flavour with more recent distillations taken from the casks maturing in the warehouses.
Macallan 1920s
During the 1920s, most Macallan produced was sold to whisky blenders as a "top dressing" single malt for their blended whiskies. The few remaining casks continued to mature their contents for longer, resulting in a whisky that was slightly drier and less toffee sweet than modern day Macallan

Macallan 1940s
During the 1940s, with a shortage of sherry cask as a result of the Second World War, Macallan would refill their casks more often than is the current practice. This, combined with the use of peat to dry the barley, resulting in a whisky that was less spicy and peatier than modern day Macallan

40% ABV / 50cl
Please note some slight wear and tear to box.
Macallan 1950s
During the 1950s, Spanish oak sherry casks became available again following the disruption of the second world war, allowing The Macallan to revert to using only first and second fill casks. This resulted in a whisky that was as rich and spicy as modern day Macallan, but with a hint of peat smoke.
40% ABV / 50cl

Featured in: The 55th Auction (Ended November 1, 2015)
Send to a friend or post on:
FacebookTwitter