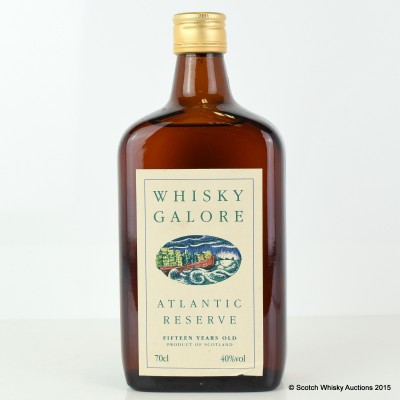 On Feb. 3 1941 the freighter SS Politician sailed from Liverpool, England for Jamaica via New Orleans. Along with fur coats, Jamaican currency and material from the British War Office 21,000 cases of Scotch whisky nestled in her cargo holds.

Her route took her north to Scotland and there, two days out of Liverpool, her voyage ended. As she sailed into the Sound of Eriskay among the remote islands of the Outer Hebrides, the “Polly” ran aground on Calvay Island.

When the inhabitants of the neighbouring small islands of Barra, Eriskay and South Uist discovered the Politician’s cargo included whisky, they didn’t miss their opportunity.

The islanders proceeded to “rescue” more than 9,000 cases of whisky under the very noses of His Majesty’s Customs and Excise officials.

Sir Compton MacKenzie, the writer, spent the war years on Barra. After the war he immortalised the events surrounding the shipwreck in his novel “Whisky Galore.” A subsequent film of the same title secured a place in Scottish folklore for the “Whisky Galore” story.

Not all the whisky was recovered in 1941 and some stayed under the waters for 50 years. The Scottish company SS Politician PLC was formed to salvage the remaining botrtles. This was done during the summer of 1990.

Whisky Galore - Atlantic Reserve is a blend of the finest grain and malt whiskies with a minimum age of 15 years. It accurately replicates the style and taste of the actual 1930s and 40s whiskies raised from the wreck.

It has a rich, dark colour and smooth flavour. It’s a whisky for the traditionalist who appreciate the whisky blender’s craft.