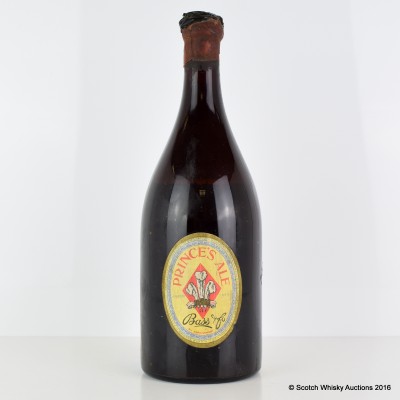 On 23rd July 1929 the King's grandson, the Prince of Wales and later Edward VIII, continued the tradition by mashing this special ale at the brewery. The King had visited the brewery in Burton-upon-Trent in 1902 to brew a special "Kings Ale". Unlike his Grandfather, Edward arrived by air and flew back to London on the same day. Quite an exceptional effort for the time!

These bottles were all sealed with red wax, with the Bass logo embossed onto it. Unfortunately the wax was very brittle, and it is unusual to find bottles with the wax still intact. Some bottles have been resealed by the Bass Museum. These are usually with black wax or with a black metallic capsule. It appears that this is the case here.

The beer was sold in many places and was said to be available up to 1945. It was sold originally for £5 a bottle, which would have been a lot of money at that time.

We have no ABV or bottle size information for this lot.

It is approx 30cms tall, the level is at the top of the bottle shoulder. We believe that this bottle may be one of the rarer Quart sized bottle releases.

Please note that due to the age of the bottle it is fragile. We are unable to offer insurance on the shipping, and the purchaser accepts full liability for the shipment of this old bottle.