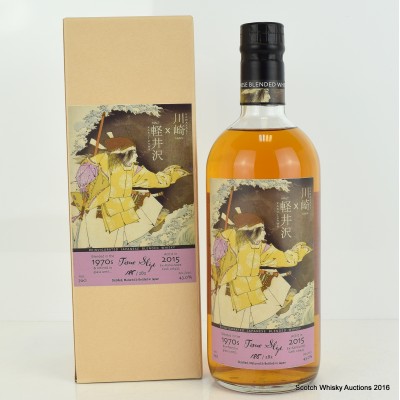 "Towards the end of 2014, we were contacted by a friend who had made an incredible discovery in a forgotten warehouse up in the cold north of Japan (Hokkaido, to be precise): a blend of Karuizawa malt and Kawasaki grain from the late 70s that had been slumbering in glass for over 3 decades. We tried to curb our enthusiasm until we had tasted it… When we finally got round to tasting it, we knew we had to do something with it. It wasn’t just a historic curiosity. It was a pretty fine specimen from the days when most Japanese whisky was… well, quite frankly, nothing to write home about.

During the last phase of its life, the liquid was returned to wood (an ex-Karuizawa Spanish oak cask from the 80s, to be precise), which had had a reinvigorating effect on the whisky. The revitalizing phase was limited by the danger of the abv dropping too low, which fortunately did not happen. It was bottled during the last days of 2015, by which time the whisky had acquired a depth and vitality rarely encountered in whiskies from the late 70s."

This is a rare bottle of whisky chosen by Nonjatta.